my Path to published author 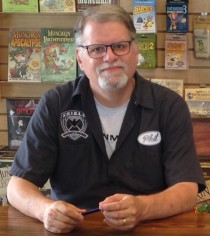 My life is inexorably intertwined with fantasy, science fiction, and games.

I have been addicted to fantasy and science fiction stories since I read The Hobbit and Jonathan Livingston Seagull at the age of 12. Prior to those two seminal works, I was an avid mystery reader, starting wth Encyclopedia Brown novels and Ellery Queen magazine before moving on to Hercule Poirot and, of course, Sherlock Holmes. By the time I found fantasy, I had read all of Sir Arthur Conan Doyle's Holmes stories and novels. I still have the giant, two-volume omnibus of every story from my childhood.

Like most authors, I also had several English teachers who saw in me a desire to explore the world through words and helped nurture that desire. I dedicated my first novel, Judgment, to them. Thanks Miss Ellenwood, Mr. Parr, and Professor Thompson. Without all of you, I would not be the writer I am today.

My love of fantasy and science fiction led me to role-playing games (Dungeons & Dragons and Traveler being my initial forays into that world), which then brought me to the day that my wife introduced us both to Magic: The Gathering. By then I had a writing-adjacent day job as a technical editor. When the chance came to interview for a job on Duelist magazine (the in-house publication for Wizards of the Coast dedicated to the new trading card game), I jumped at the opportunity. We packed up our budding family and crossed the country.

That job gave me my first opportunity to write tie-in fiction. After writing a lot of flavor text for early Magic cards, I was asked to write guidebooks for the Urza cycle of card sets. I wrote short stories for those books that acted as introductions to the larger stories of the sets. Those stories led to short stories in a series of Magic: The Gathering anthologies and my first novel, Judgment.

Since then, I have written seven novels in various game universes, including four set on Necromunda in the Warhammer 40K universe and the first Mage Wars novel -- Nature of the Beast. I also have published about sixteen short stories, most of them tie-ins to gaming worlds, but a few set in worlds of my own devising.

Over the years, I even spent time writing for games themselves. In addition to writing flavor text for Magic: The Gathering, I also worked on numerous video games, including Guild Wars, Guild Wars 2, TERA, ZMR, HAWKEN, and Crosswords Plus (on the Nintendo 3DS). More recently, I moved back to the table-top gaming world, writing material for a slew of card and board games for Funko Games, including Pan Am, Godzilla Tokyo Clash, and War With the Evil Power Master (a Choose Your Own Adventure game).

Looking forward, I have two more novels I wrote during 2020 that are in production. Both of these are television/movie tie-in novels. The first of these novels has just been announced. Strangled by Death is a horror-mystery novel featuring Carl Kolchak from The Night Stalker TV series. It is due out this March. I also contributed to two more Funko games projects during 2020. These games and my second 2020 novel have not yet been announced. Watch this space for news on of those projects.