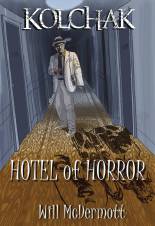 Will's next novel is supernatural thriller starring one Carl Kolchak, the intrepid reporter and monster hunter famously played on  the small screen by Darren McGavin.

Now working for a Hollywood rag (and still hounded by his editor Tony Vincenzo), Kolchak must bear through a California heat wave (mostly by complaining) as he tracks down a burglar who robs rich, aging actresses while they sleep without tripping any alarms or leaving a trace of evidence (save some weird wax deposits). Just as this scant evidence points to a supernatural perpetrator, a rash of gruesome stranglings of young and vulnerable aspiring starlets threatens to push the already overheated city over the edge.

Published by Moonstone Books, Strangled by Death is on sale now. 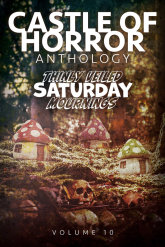 I have a story in this anthology, published by Budgie Smuggler Games to promote the release of their new version of the Renegade Legion Universe science fiction RPG setting set in the 75th Century, where humanity has spread through half of the Milky Way.

My story, "Unsanctioned," is a fun, Ocean's Eleven-esque heist adventure pitting forces from the Union (a collective of planets and races who oppose humanity's expansion) against the TOG empire in a race to see who will control a new technology. I love the characters and hope I get a chance to explore their backgrounds in a future RLU project as well.

Check out the Budgie Smuggler website for more information or head over to Amazon to purchase and download the Kindle ebook. POD physical copies will soon be available as well.

Will McDermott is a lifelong gamer, a professional editor, a published novelist, and an amateur cook. He has published eight novels in the worlds of Magic: The Gathering, Warhammer 30K, The Night Stalker, and Mage Wars, and more than a dozen short stories.